Summary: The black bird has a forbidden desire for the mustache pig. But their time together will be tragically limited. Humor/Parody, rated PG-13 for slash and birdie innuendo. 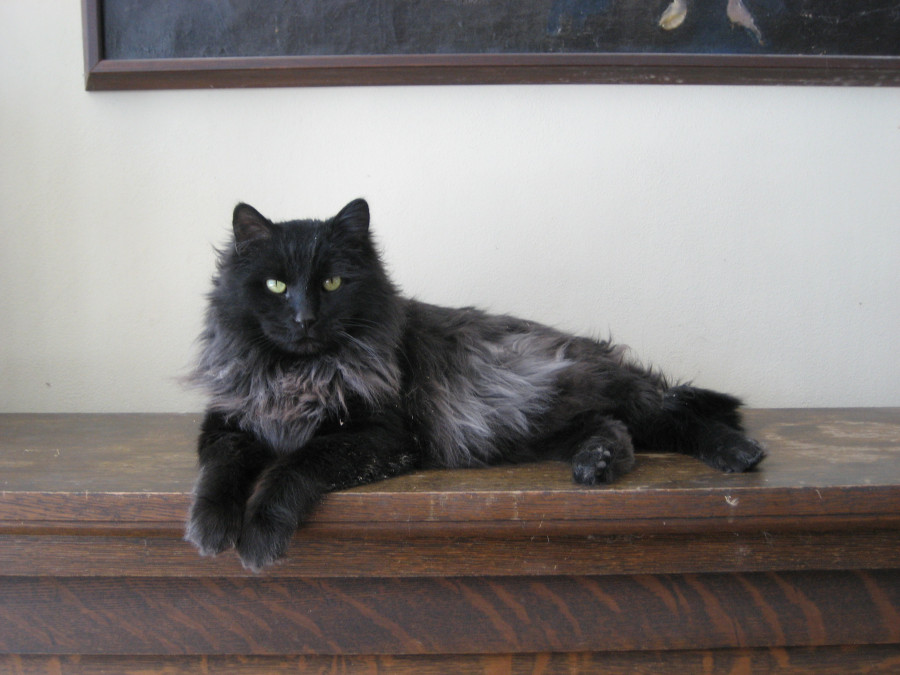 Brujo was the inspiration for Tevildo in Out of the Blue and The Last Hero. He will be missed.

Is he really back or is this an imposter?

First TV show I had self-insertion fantasies about:
Bonanza -- if it counts that I used to fantasize myself as Little Joe Cartwright.  First time I self-inserted as my own original character was Gunsmoke -- in the Burt Reynolds years.

First fandom in which I interacted (online and in person) with other fans:
Star Wars, back in 1979, first in newsletter 'zines and later as a fanfiction writer.  Later, I wrote Indiana Jones fanfiction too.

Pairing in the first slash fanfiction I read:
Kirk/Spock, although the story I read was a satire of the K/S genre, done for laughs.  First serious slash I read was by Bone Fauna, and I think the pairing was Legolas and the Twins.

Pairing in the first fanfiction I wrote:
Han Solo and Princess Leia, implied.  And it was a romantic pairing, since any graphic sexual activity was forbidden.

First RPS/RPF I read:
Oh, good lord.  I really don't know, since I don't read RPS.  I think it was Orlando Bloom/Sean Bean with some H/C from Viggo.  But let me put in a good word for a hilarious piece of 'fanfiction' called Shorts Weather, which featured Stephen Colbert and Bill O'Reilly in a hotel room with some slashy overtones.

First fanfiction I read that made me think, YES, this is exactly the kind of fanfiction I'd like to write.
Elise LeRouret's Pottymouth.  It was so original, so different that it made me see the possibilities in Tolkien fanfiction.  I had previously thought, why bother?  The story has already been written.  Oh hell no it hasn't!

First OTP:
Indiana Jones/Marion Ravenwood.  And let me tell you, I'm pleased as punch that I turned out to be right, even if it wasn't the way I would have hoped.

First fannish friend I met in person:
A wonderful woman named Bebe, who has been my penpal since 1983, when she illustrated one of my Star Wars fanfics.  We've met many times in real life.

I'm running a test to see who's reading my posts. So, if you read this, leave me a one-word comment about your day that starts with the third letter of your LJ USERNAME. Only one word please. Then repost so I can leave a word for you. Don't just post a word and not copy - that's not as much fun!

I've finally run out of patience with Fanfiction Net and have set up a forum at Pro-Boards.

You can find it here: Son of Cabbages and Kings.

I'm still in the process of making it pretty and learning how to run it, so bear with me.

electricdruid at The fiasco continues

ACTA in a Nutshell –

What is ACTA?  ACTA is the Anti-Counterfeiting Trade Agreement. A new intellectual property enforcement treaty being negotiated by the United States, the European Community, Switzerland, and Japan, with Australia, the Republic of Korea, New Zealand, Mexico, Jordan, Morocco, Singapore, the United Arab Emirates, and Canada recently announcing that they will join in as well.

Why should you care about ACTA? Initial reports indicate that the treaty will have a very broad scope and will involve new tools targeting “Internet distribution and information technology.”

What is the goal of ACTA? Reportedly the goal is to create new legal standards of intellectual property enforcement, as well as increased international cooperation, an example of which would be an increase in information sharing between signatory countries’ law enforcement agencies.

Say NO to ACTA. It is essential to spread awareness and get the word out on ACTA.

This entry was also posted at http://cantarina.dreamwidth.org/131889.html. (comments:

Here is what I have to say about all of this --The internet is beginning to function as the brain of the planet. Limiting what we can see and access on it is like Humanity taking a great big Stupid pill. Please, Mr. President and members of Congress, think very hard about the unintended consequences of these things.

It's Sunday afternoon, and except for a brief resumption on Tuesday night, the posting lockout continues. It may seem like a minor frustration, but to those of us who have an online community there, it is disheartening. I am beginning to think that this is the end of something that has been a meaningful and enjoyable part of my life for over five years.

Do I pull the plug? Do I set up an alternate site and hope some of my good friends from FFN can find their way there? That is, assuming they haven't drifted away already.

This is the longest posting lockout I have ever experienced at FFN. There was a brief restoration on Tuesday, but the ability to post was gone by the next morning.

Still no peep from Fanfiction Net about what they are doing to fix the problem. Can the days of forums at FFN be over?

Fanfiction Net forums have been unavailable for posting since this morning. Anyone want to make a bet about how long the lockup will last this time?
Collapse